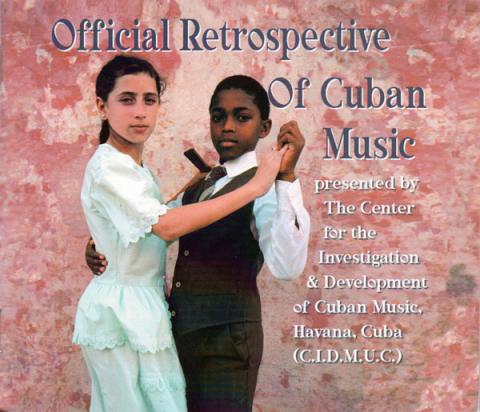 We are the original producers of this CD Set. These are NEW.

"In the Official Retrospective Of Cuban Music, ethnomusicologist Olavo Alen Rodriguez has compiled a superb introduction to the cultural and historical roots of what is arguably the most influential musical tradition of the Americas. ” — Michael Stone

This 4 CD box set represents our desire to showcase a panorama of Cuban music. Almost all of these CD's contain never released music from all parts of Cuba, and represents the majority of Cuban genres of today and yesterday.

Also included is an 80 page booklet written by Olavo Alen Rodriguez and Ana Casanova of CIDMUC describing the genres on the CD's and an introduction to Cuban Music. The booklet is in English and Spanish in the US/Canadian Release and English/French for the European release.

Please Note: There are very limited copies remaining (less than 20).

This will never be reprinted and can't be released digitally due to contract limitations.

Since its very inception, the music of Cuba has not only intrigued the United States, but the entire world. The music of Cuba has always had a certain mystique to it. And one would never have imagined it, but the economic embargo that the US has had against Cuba since 1961 has affected even the production of art on the island. Interestingly, the mystique about Cuban music has grown only all the more intriguing to Americans as a result of these political hostilities between the two nations, forcing collectors and record companies to conduct a form of trade under less than ideal circumstances.

Somehow, hundreds of compilations of Cuban recordings have managed to make their way to the United States despite the embargo, and by sometimes unknown methods. On the one hand, many of these recordings that come direct from the island have saved American ears from the otherwise monotonous salsa style of the past decade. But it has also confirmed that, despite its ostracism by most of the democratic nations of the world, Cuba continued and continues to educate some of the most talented artists on the entire planet.

“This 4-CD set is an excellent addition to any existing musical collection and a good representation of the folkloric and popular music of Cuba.” — Latin Beat Magazine - Nov 1999

This anthology of Cuban music, put together with the cooperation of the Center for Research and Development of Cuban Music, rescues the work of groups not yet introduced to audiences outside the island. Additionally, Dr. Olavo Alen Rodriguez and Ana Casanova Oliva invested their academic efforts in formulating the valuable historical and bibliographical notes that accompany this production.

Cuban music is arguably the most universal music of all. And by listening to it, by enjoying it, and by dancing to this unique collection of recordings we have compiled for you, we know you'll find the reasons to argue for such a claim. Finally, it is fortunate that, for those of us who love and cherish music down to the most central part of our souls, no barriers - whether they be political or economic -can ever censor the joy of music, particularly Cuban music.

Tracks (Look below for sample tracks)

At last, you can take a lesson from a Cuban piano master. Emilio Morales, along with musicologist Jon Griffin, will guide you through the full array of Cuban styles. From traditional Cha-cha-chá and bolero to son moderno and timba. This book will show you actual examples of Cuban music, not just a bunch of exercises to practice.

We also use analytics & advertising services. To opt-out click for more information.